Four Parenting Lessons You Can Learn From The Rock 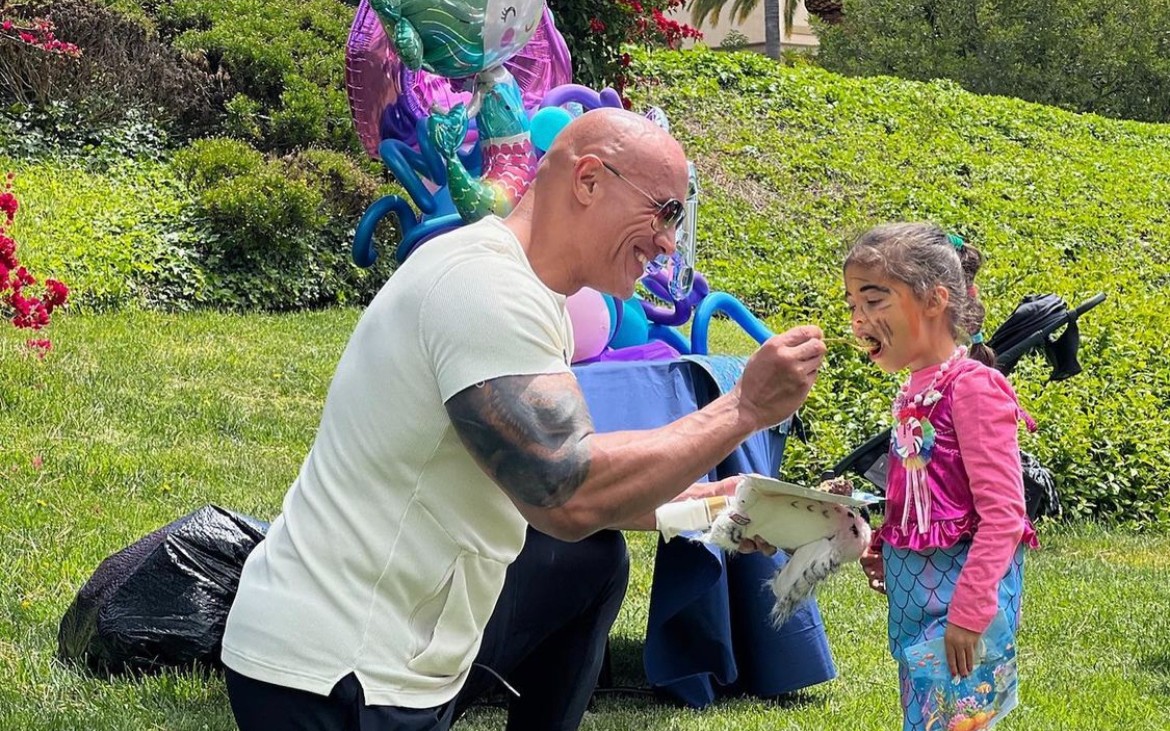 He’s one of the biggest movie stars in the world. No, that’s not true. He’s one of the biggest stars in the world, period. In addition to starring in more than 40 films that have grossed more than $10 billion worldwide, he owns a pro sports league and a tequila company (among others). He’s a Hall of Fame professional wrestler. There’s a literal sitcom about his life (which he also produces). But the role Dwayne “The Rock” Johnson loves most is one we all understand—dad. As hard as Johnson goes on the set or in the gym, he goes even HARDER at a dress-up tea party with his daughters.

You can tell how much Johnson loves being a dad…because he says as much. Often and enthusiastically. But actions speak louder than words, and his actions on the dad front come screaming in from the top rope. They are undeniable and incontrovertible.

You cannot see Dwayne Johnson with his girls and fail to recognize how much he loves being a dad. There’s a lot we can learn from him in that regard. Here are four big lessons that jump right off the screen.

If there’s one common parenting mantra you hear repeated ad nauseum, it’s “the days are long, but the years are short.” The time when you are the most important thing in your kid’s life will go fast, but it’s also hard to feel that ephemerality when you’re already exhausted and you walk in on your toddler coloring with permanent marker on the walls.

Johnson knows the pain, but he also knows you only have so many moments when your kids are little. He once shared a photo of him holding one of his young daughters, captioning it: “Tired as all hell, but thought, ehh there’s gonna come a time, years from now when jumping in my arms is the last thing she wants to do and ain’t gonna be cool anymore – so I’ll always take these moments while I can.”

Another day, he was sharing a video of him singing with one of his daughters. He wrote that “she’s only 3 now, but I know one day down the road, hanging out and singing with daddy won’t be cool anymore, so I’ll embrace these moments while I can get ‘em…With our babies, life moves fast. We gotta live it with all we got.”

“Always hold fast to the present,” Goethe said. “Every situation, indeed every moment, is of infinite value, for it is the representative of a whole eternity.”

What  you can do today: Show gratitude for whatever parenting challenge comes your way. Even if it’s a chaotic morning of getting the kids fed/dressed/where they need to be, remember, someday you will miss that chaos.

[2] Be ALL in when you spend time with your kids:

What’s great about The Rock is he’s not afraid to go full #GirlDad. Whether it’s getting his nails painted, or letting his daughters do “his makeup,” Johnson commits fully to play time. It’s a great example, because if even a mega-muscled, action-movie star can get a makeover, no dad can hide behind antiquated views of masculinity as an excuse to opt out of the same.

Part of being a dad is meeting your kids on their level, and doing what they love to do. Johnson shared a picture on Instagram recently of him having a tea party with his 4-year-old and a stuffed bunny, writing “these daddy/daughter/bunny tea parties have a special way of kinda putting life into real perspective…she probably won’t remember this, but I sure will.”

Your kids can tell when you’re present. They can feel that you’re here. That you’re laying in the bed beside them and it’s safe for them to fall asleep. That you’re connected and engaged with the game you’re playing together. That your hands are firmly on the handle of the stroller. That your attention is locked on the thing they’re trying to show you.

The thing they love is now the thing YOU love. Because when they get older, they’ll realize the thing we actually loved was just spending time with them.

What  you can do today: Put your phone away when you’re playing with your kids. Put it in a drawer in a different room. They need to see the only thing you’re focused on is being with them.

One of the most powerful things we can do is learn from the mistakes our parents made from us. Johnson has spoken frequently about his “complicated” relationship with his own dad. And while he was raised with a tough love approach, Johnson is determined to ‘be a better dad’ to his own kids.

“My dad loved me with the capacity that he had, but we had a challenging, complicated relationship,” he said in an interview with Fatherly. “So now with my daughters, especially my younger daughters, the intention is to just be a good dad and be there. That means taking them to school every morning, picking them up, taking them to soccer, being that dad.”

No matter what shortcomings our parents had and the impression it left on us, we can make the choice to be better. To recognize, and even appreciate, their shortcomings, as they mark the path to be better dads to OUR kids. We are where our parents were years ago.

You can choose to be different. You can focus your energy on where it will make the biggest difference, with your kids. You don’t have to go back in time. You can change the present…and in the process, not only help your kids but help heal your own wounds.

What  you can do today: Reflect on the approach YOUR dad took to parenting and think about one way you want to be different, starting now.

Johnson once said in an interview with Oprah that he makes sure his daughters not only know how much he loves them, but that it truly is unconditional. “As I told my (then) 18-year-old daughter Simone, ‘I love you. I’m going to tell you I love every day,’” he said. “But I also told her it’s without condition…you don’t have to text me back.”

His oldest daughter is following his footsteps in the wrestling world. It’s tough to work in the same arena where your dad was a legend, but Johnson didn’t dissuade his daughter from following her dream. He didn’t try to shield her away from what can be an extremely challenging path. He just let her know she had his full support. “Carry our family name proudly, but your road will always be yours to create, earn & own,” he wrote. “So proud. Live your dream.”

No matter what it is, or where life pulls them, we owe them that support along the way. We can give them the most priceless thing in the world. We can believe in them. No matter where they want to go, they need to know we will be there cheering them on every step of the way.

What  you can do today: Tell them. Make sure they know that you not only love and support them, but that it’s unconditional and that you will ALWAYS be there for them.

The Rock is one of the most popular entertainers of all time, across multiple mediums. HIs success is more overwhelming than his physique. But the most valuable thing he’s learned along the way is how to be a dad. “Just be there,” he said. “You can be wired, as a lot of fathers are, to fix things. Just having an expanded capacity to listen and be more tender and gentle really gave me that ability to solve whatever the issue is, but with them compared to for them.”

Being a dad is something you do every day. We created a daily email that helps you become a better dad, every day. It’s called Daily Dad. One piece of timeless advice, delivered to your inbox every day. It’s FREE and you can sign up here.

Sign Up to get our FREE email.
One piece of timeless parenting advice, delivered daily.

How Have We Gotten So Far From This?

Do you know the story of the 300 Spartans? Maybe you do. It was first…

It’s A Lie And An Excuse

This is just my personality, we say. I just don’t have any energy when I…

Give Them A Minute!

You missed them while they were away at school. You want to hang out with…

Does It Have To Be Hard To Be Your Kid?

DADS ALL OVER
THE WORLD

Join Daily Dad now and tap into a community of dads all over the world dedicated to becoming the very best dad they can be. you’ll get a daily meditation on the above themes and more.