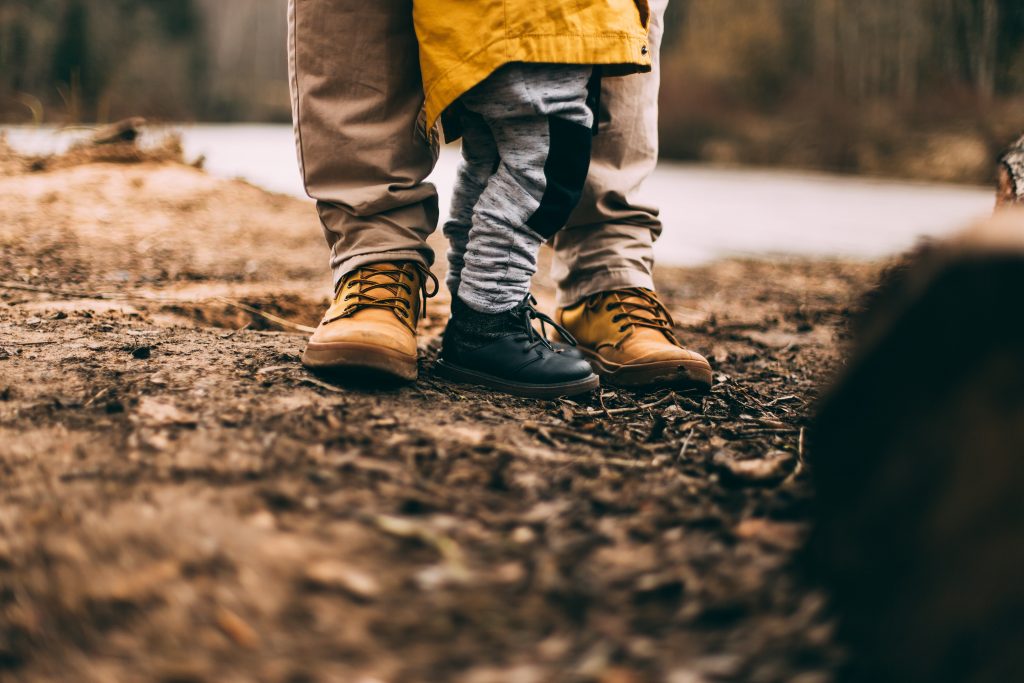 What it means to be a father in America has changed dramatically over the past few centuries. These changes have, for the most part, been positive. But as fatherhood has progressed, some things may have fallen along the wayside which may be important to hold on too like the instilling of discipline and moral values into our children.

History is our greatest teacher and there are always lessons to be learned from our forefathers. So let’s examine how the roles of fathers have shifted and changed over time. We will notice several significant improvements over the generations, but will also see the inherent value in some of our ancestors’ parenting styles and tactics.

From Colonialism to Civil War Fathers

During the colonial period of American history (1492-1763), the men who lived in what would one day become the United States of America were of a fairly stern breed. Disciplinarian heads of the house who made certain bread was on the table and prayers were said for it. They were robust hunters and fishermen, still venturing out into the wild to find food for dinner just as men had done for millennia prior.

But in terms of parenting, it was the mothers who performed the heavy lifting at home. The father was the stoic figure resting in his chair at night, not to be disturbed as his spouse handled the household activities. She took care of him, with any daughters helping her with her work. The boys became clones of their fathers; as they got older, the colonial father would train them to do as he did, passing on the knowledge and skills to prepare his sons to take his place. For his daughters, he would help find a suitable husband once they came of age to marry.

Children were expected to fulfill many responsibilities within the family. If they slacked in these duties, the colonial father was there to correct them as necessary to ensure the family unit survived. But just prior to the Civil War (1861–1865), life was starting to get a bit easier. America had existed for almost a century, and individual states were well-established by this point.

Modern cities and factories were emerging across the nation, and a burgeoning middle class was forming. However, fathers were still training sons as apprentices or to tackle the laborious tasks of running a farm. And many of those factories were stocked with child employees. Childhood was a time to work and being a father meant ensuring your children were able to contribute. Many jobs were dangerous, so it was the fathers responsibility to properly train youth for their safety and well-being.

Everyone had to pitch in, even more so once the Civil War began and many fathers were called to leave their homes to help fight the way, many never to return. One of the most fascinating legacies of this period is the number of letters sent between family members. These letters reveal another side of those stoic fathers who, away from their children and facing mortal danger, revealed their innermost feelings. What these fathers could never say in person, they were willing to put down on paper, knowing it could be their last words to their loved ones.

With the dawn of the 20th century came an interesting change that impacted parenting significantly: the number of childbirths dropped by nearly half. Whereas families were birthing an average of six children over the course of the previous hundred years, the 1900s family was content with an average of three. Part of this was due to having less agricultural/farm work to do, coupled with a decline in the child mortality rate because of medical improvements.

This could have been a great time for fathers because of the amount of time that was freed up to spend with their children. But sadly, World War I added a few hiccups to this development and many father were again forced to leave home to go fight in the war.

Another major influence on the amount of time fathers had at home was the automobile boom, which allowed opportunities to travel further away for work. But then things took a turn for the worse as the Great Depression struck the nation and millions of fathers lost their jobs.

This severely impacted the collective self-esteem of men around the country, but also caused a new way of thinking in terms of gender roles. Suddenly women were the primary breadwinners because the types of jobs they were doing were less impacted. And so the roles of fathers began to shift during this period. Mothers in the workforce had swapped places with men who found themselves home doing “women’s work”…and discovering that it was not as simple as they’d believed.

In a study of World War II veteran fathers, it was noted that ideas of parental functions fell roughly into two categories: traditional and conceptual. Traditional concepts included making sure that children were clean, groomed, well-behaved, and respectful. These traditional concepts hearkened back to the virtues that parents had carefully tended in their children over the previous few generations.

But beyond these were more subjective concepts, which included developing self-esteem as well as encouraging self-reliance, social interaction, and citizenship. Interestingly, it also put a new onus on the parent — to be a happy, positive person for the sake of their children’s wellbeing. It was no longer enough to simply tell children what to do.

Another interesting correlation discovered during the study was that the more skilled in their trade a father was, the more they focused on the subjective concept areas. The better off a father was financially, the more concerned he was about ensuring his children were ready to fulfill a higher place in society. And in general, fathers felt they were more responsible for this conceptual development, whereas the mothers’ roles were to tend to the basic traditional areas.

Fathers were participating more in the lives and development of their children, but there were still large distinctions regarding who was in charge of what aspects. There was still a highly strategic element to how fathers approached parenting, and how they wanted to mold their progeny and shape their futures.

Following the so-called beatnik era of the 1950s, the nation soon faced yet another turbulent time. The 1960s saw major cultural and political shifts that impacted fatherhood tremendously. The post-WWII baby boom had led to a suburb boom as well, leading to many families moving out of the cities. This was a setback for women wanting to be involved in the burgeoning feminist movement, because now they were boxed in to cookie-cutter communities. Nevertheless, these subversive ideas were reaching stay-at-home moms, ensuring the topic was kept alive and well.

However, the exploration of parental equality was delayed yet again as the Vietnam War escalated, causing hundreds of thousands of men to be shipped off to Southeast Asia. Many who returned home were never the same, and the poor treatment they received back in their hometowns made matters even worse.

Anti-military sentiment ran high as the youthful counter-culture movement went into full swing. It was a bad decade for GI fathers who either had to postpone having children, missed years of the lives of their children, or ended up getting divorced. And as mentioned, the fathers who deployed weren’t always the same fathers who came back. Before the term Post-Traumatic Stress Disorder was coined, all too many Vietnam Vets and their families were experiencing it without having learned the necessary coping mechanisms.

Meanwhile, fathers who weren’t drafted were segmented into categories of right and left, a political division which still impacts the values fathers teach and raise their children with to this day.

With the Vietnam Era in America’s rearview mirror, fathers had a chance to evolve rapidly, from the hypersexualized ‘70s through the neon-drenched 1980s and into the closing years of the millennium. This was a period of reasonable economic stability, as the Cold War came and vanished and the country was able to avoid any major wars.

Fathers were increasingly able to spend more time at home, participating in their children’s lives in new ways while setting up new expectations. The future looked bright. Art and creativity were bursting at the same time technology was on the rise. More and more, children were presented with the idea that they could grow up to be anything they wanted, whether it was a computer programmer or a television celebrity.

Not all fathers bought into this line of thinking, but many did because they had experienced it themselves. A strong middle class coupled with the advent of the Internet made the world seem more and more accessible. Fathers didn’t have to settle for hoping their children would have a better life than they’d had, or to worry about preparing them to replace their parents as breadwinners. This allowed for some relaxation of discipline as children began to develop more freedom and a voice of their own at the dinner table.

Fatherhood in the 21st Century

Skip ahead to the end of the 2010s, and fathers find themselves in a world where gender equality is becoming less of a concept and more of a reality. Men are not expected to be the sole income earner and women are staying at home less and less. Indeed, couples increasingly swap traditional roles, allowing fathers to stay at home, get the children up and ready for school, run them around to their various daily activities, stay involved in PTA meetings, and do their share of laundry, grocery shopping, and meal prep.

The increasing fluidity of the traditional functions and assignments of child-rearing allows for more flexibility in terms of who manages the subjective parenting concepts as well. Parents are able to work together as a team more than ever before.

Modern life has allowed children to be children longer, but it has also allowed fathers to retain childlike characteristics as well. We modern men behave differently than our grandfathers and great-grandfathers. We are more free to be playful, more confident to show emotions, more considerate of our own feelings. Men are also more likely to obsess over things such as movies or video games which once were considered the sole domain of children. This can be viewed as positive, considering that it helps bridge the gap between what we and our own children take an interest in.

In fact, with the rise of YouTube we see tons of homemade videos of fathers engaging with their children in shared hobbies. Meanwhile, children feel more empowered by their parents to explore entrepreneurial ideas, unencumbered by strict rules of what’s allowable according to the stern expectations of the patriarch.

What does this all mean for the modern father? Are there downsides to any of this? There can be. The fact that the boundaries between adult and child are growing smaller does not mean fathers may allow their children to run free and undisciplined. We fathers still have many obligations to fulfill to take care of our children and ensure they grow up right. We must be there, with all our hats, ready to serve as a role model, teacher, mentor, counselor, and now, perhaps more than ever in our history, as a friend they can trust. Fatherhood has changed over the years, but that doesn’t mean it’s any easier. It just happens to be a lot more fun.