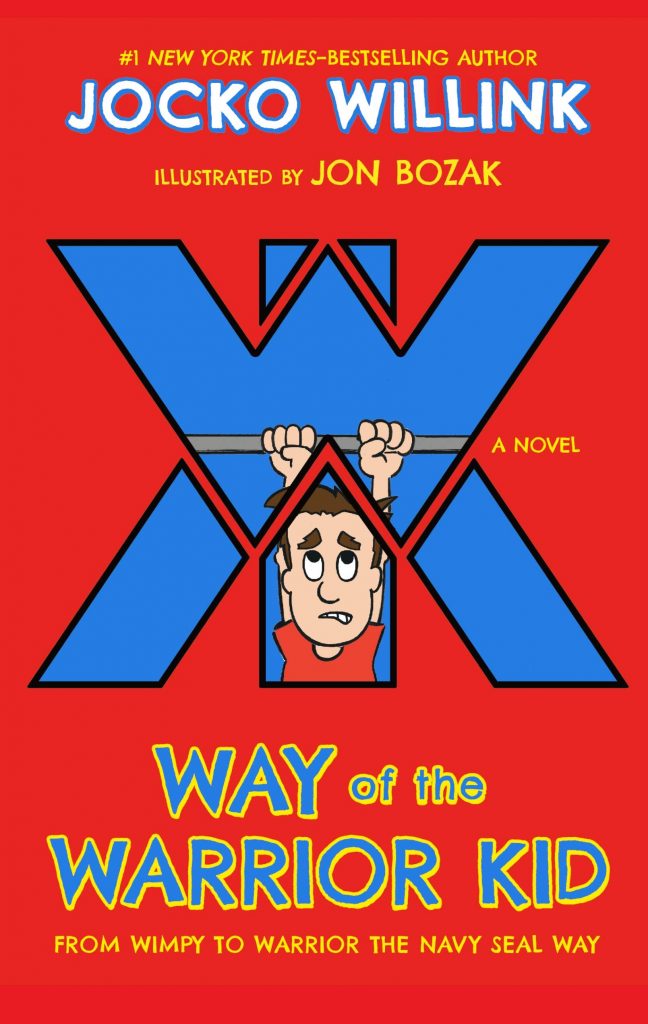 What is Way of the Warrior Kid?

Way of the Warrior Kid is a children’s novel written by retired Navy SEAL Jocko Willink designed to teach kids of all ages how to apply the principles that will help them become the best version of themselves now and for the rest of their lives. The reason he wrote it, in his words, was because he couldn’t find other children’s books that encouraged them to embrace the characteristics he valued- “to be disciplined, to work hard, to face fears, to be strong and smart and healthy, and to stand up for themselves and what is right—like warriors.”

The plot revolves around Marc, a fifth grader who isn’t doing well in school, gets bullied, and isn’t physically fit. Until his Uncle Jake, a Navy SEAL comes to stay with him for the summer and teaches him how to study hard, train hard, and live by a warrior code. By the end of the book, Marc is transformed into a “Warrior Kid” who is disciplined, works hard, and stands up for himself.

Much to Willink’s surprise, it’s even been embraced by many adults. One reader wrote to him saying he was overweight, depressed, and not moving forward in his life but after reading Way of the Warrior Kid he was inspired to lose almost 40 pounds, work harder at his job and turn his life around.

Since its publication, the book has led to two sequels, a podcast, and continues to inspire children and adults around the world.

Who is Jocko Willink?

Jocko Willink is a decorated retired Navy SEAL who fought in the Iraq war where he helped lead SEAL Task Unit Bruiser in the battle of Ramadi-one of the toughest battles in the history of the SEAL teams. Since retiring in 2010, he’s started Echelon Front, a consulting firm that teaches other businesses how to build effective and high-performing teams, along with fellow former SEAL Leif Babin. He’s also written several books on leadership and is host of the popular Jocko Podcast.

Summary OF WAY OF THE WARRIOR KID

It’s the last day of fifth grade and Marc couldn’t be more relieved that it’s over. First, he doesn’t know his times tables, so he feels like he’s dumb. Second, his entire class knows that he can’t swim or do a single pull-up, so he feels like a wimp. And on top of this, he’s at the mercy of the school bully, Kenny Williamson. The only thing looking up for him is the fact that his Uncle Jake, a Navy Seal, is coming to visit. But he’s afraid that even his Uncle won’t want to hang out with him once he realizes what a wimp he is.

Uncle Jake finally arrives and Marc can’t help bursting into tears while telling him of everything he went through over the past school year. Jake isn’t fazed, though, and let’s him know that every single one of those problems is something he can change for the better.

Over the course of the next couple of months, Uncle Jake goes about turning Marc into a “Warrior Kid.”

He starts by waking Marc up before the sun rises every day to work out. He then gradually helps Marc overcome his fear of the water. He gets Marc to do his first pull-up and teaches him the warrior codes of everyone from the vikings to the marines. He teaches Marc how to study by using flash-cards and starts taking him to Brazilian Jiu-Jitsu classes. But most importantly, he teaches Marc the value of hard work and discipline.

By the time school starts, Marc’s perception of himself has completely changed thanks to everything his Uncle Jake taught him. He can do his multiplication tables in record time, he can do ten pull-ups, and he not only stands up to, but befriends his old bully. Thanks Uncle Jake!

You can do anything if you do the work

The main lesson your kids can learn from Way Of The Warrior Kid is that the person they want to be is on the other side of hard work. At the beginning of the book, Marc can’t swim, can’t do pull-ups, and he isn’t doing good in school. Because of this, he labels himself a wimp and he labels himself dumb. While he is the one who does the hard work of training and studying every day, he wouldn’t have been able to see that unless he had his Uncle Jake there to guide him.

This is something you can do for your kids too. If they ever feel like their dumb because they just don’t get something in school, or that they aren’t “athletic” because they can’t do as many push-ups or pull-ups as the other kids, let them know that all of those are problems they can change for the better. And if they need you there to push them at first, then be there to push them. Once they start seeing the benefits of doing the work, then they’ll start pushing themselves.

Control your fears, don’t let them control you

One of the pivotal moments in the book is when Uncle Jake wants Marc to jump from a bridge into the river that he’s been learning to swim at. Up until then, Marc had done a good job of getting comfortable in the water, to the point that he could swim across the river and back easily. But the thought of jumping off the bridge provoked so much fear in him that when he got to the edge, he was paralyzed.

That’s when Uncle Jake came up and explained to him that there’s nothing wrong with being afraid. Even a tough Navy SEAL like him still gets afraid. But what’s wrong is letting our fears control us. And you can only do that through action and preparation. Marc had already prepared by swimming across the river but that last bit of hesitation left inside him was just because he was about to experience something he’d never done before. He was afraid of the unknown. Following this, Marc finally jumps into the river from the bridge and ends up liking it so much that he does it “again and again and again.”

You must live by a code

When Uncle Jake first told Marc that he’s going to turn him into a warrior kid, Marc had a very different conception in his mind of what he thought a warrior was. Marc’s first guess had to do with something along the lines of “fighting the enemy” and “waking up early every day,” but Uncle Jake lets him know that being a warrior is first and foremost, about living by a code. So to help Marc come up with his own code, he first has him study the codes of just about every other warrior group, from the SEALS, to the Vikings to the Samurai’s.

By the end of the book, Marc has come up with his own Warrior Kid Code:

By having this code, which many adults would also do well in adopting, Marc always knows what he has to do to know that he’s working hard, staying disciplined, and trying his best.

Learning how to defend yourself is important

One of Uncle Jake’s first orders of business is taking Marc to Brazilian Jiu-Jitsu classes. On the first day, Marc gets taken down by a kid much smaller than him. This makes him realize that anybody can learn how to fight and how to defend themselves, no matter their age, shape, or size. Eventually, he’s able to take down a kid much bigger than him on the basis of knowledge and experience alone.

This gives him the level of confidence he needs to finally stand-up to his bully, Kenny Williamson, when school starts back up again in the fall. But, it’s important to note, because of everything he’s learned about good sportsmanship through his training, he stays humble, and even befriends Kenny.  He just knows that he can’t be pushed around anymore.

One day, Marc’s alarm clock goes off and he doesn’t feel like getting out of bed so early. He’d been doing it every day for the past couple of weeks so he felt like he deserved to relax a little more that day. Uncle Jake has to wake him up and teaches him a lesson that almost everybody knows but so many of us fall short on. The way to improve and become better every day is by doing so even if you don’t feel like it.

In the words of Uncle Jake “Even if you can’t perform at a high level, showing up and doing something is still a thousand times better than not showing up at all.” This, he tells Marc, is the only way to eventually become free of the things that we feel are trapping us now. Doing the hard work to improve, no matter what, is how we can have the freedom to turn our dreams into a reality. In this way, discipline equals freedom.

For more on helping your kids adopt a healthy set of rules in their lives visit our article on Setting rules for your children. It covers why you need rules, examples of rules, how to enforce them, and more